Our first stop in Germany was Hamburg. Since its inception it has been a vital seaport, and to this day still beats with the heart of a sailor. You can feel the toughness and grit of the place the moment you step out in the streets. There is nothing fancy about it. Hamburg is a “what you see is what you get” kind of place. The people of Hamburg are rough, hardworking and not necessarily the kind that take too well to joking around. Even though the Library of Congress disputes this fact, White Castle restaurants says it traces the hamburger’s origin back to this old shipping town. So, naturally we had to look for one as soon as we had locked away our things at the local backpackers’ hostel. We came across a place called Saints & Sinners and we each had three different variations of an exquisite burger. True or not, believing that the iconic sandwich was conceived here made it taste that much better. At the end of this meal we came to the shocking conclusion that many businesses in Germany do not except credit cards, and that cash is not only king, but in most cases your only option. Luckily my all-knowing mother had prepared me with ample Euros before I left. This was the first realization of the many stark cultural differences we would soon discover here.

The only knowledge I had of Hamburg before arriving there was of the many shows the Beatles played there before the British Invasion. On Reeperbahn street, which is what seemed to be a Germanic version of Bourbon Street, are sleek hollowed out (silhouettes) of the Fab Four paying homage to the times they graced the town before they became bigger then Jesus in Germany. 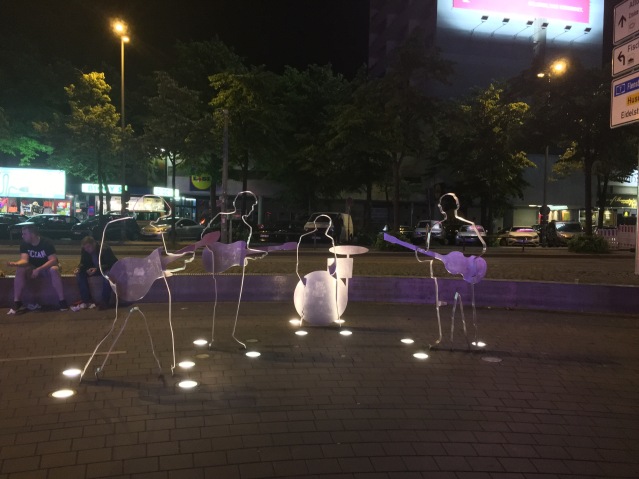 Hamburg, and what I would soon find out, Germany as a whole was the first place on my journey where I didn’t feel welcomed. This was a city build on blue collar work that takes great pride in their beloved nation’s past, present and future.

That pride is more visible here than anywhere else I had visited in Europe. This was the first country that hung their flags out their windows. They even had German flags them waving off their cars just like we do back in the states to cheer on our local football team. Smiling locals were pretty hard to come by… until they started drinking. Once they were sauced up the people seemed to be jolly, loud and remove their hard outer shell. Yes, we all get similar effects after we have a few, but here it was much more visible that the weight of their world was lifted off of their shoulders the deeper they dove into their night.

From Hamburg we traveled to Berlin a place which is a place I had read a lot about before but soon realized I knew very little about. If you flip through the pages of a world history book you will notice a disproportionate amount of the chaos over the last century stems from a single location – Berlin. This city has found and lost itself many times in many different ways since its inspection and has treasures, triumph and scars unlike any other modern city. Berlin is now the thriving centerpiece to a country that is the economic overlord of Europe. Even with that the effects of its past transgressions are visible throughout the cityscape. When you are attentive to it you see how it shapes the lives of those who dwell there today. It’s a city where the people seem to have done their very best to forget about the horrors their nation once fueled and focus on the potential of Germany’s future. 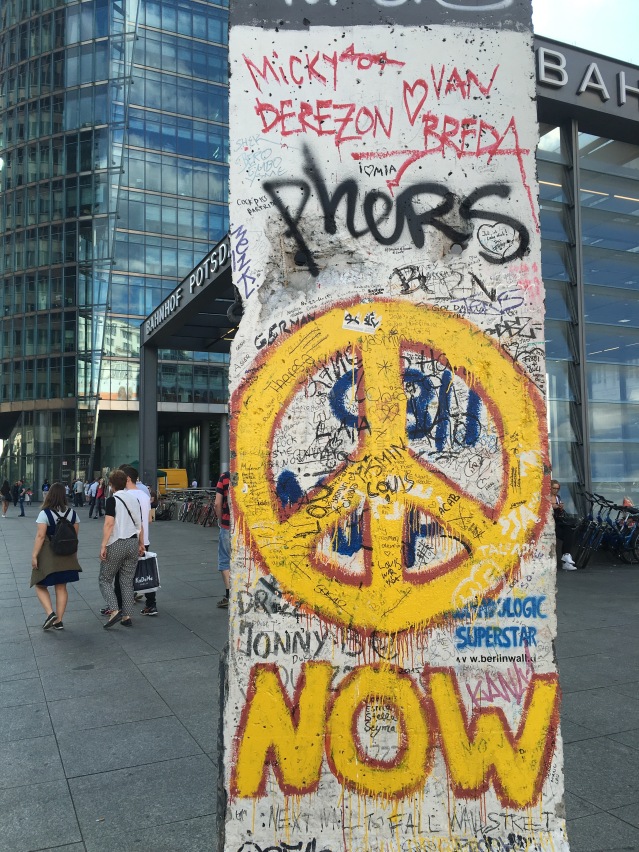 It is a city that for decades was separated by a wall that represented much more than just a border between nations, but a stark line drawn between two polarized views on life. Talking to some locals I learned that the ideological divide that the wall created is in some cases still seen today between those who are from the West and East making Berlin a city with a shared heart but split personalities. I figured there was no way better to truly experience this Germanic pride then fully amercing myself in what is a national celebration. So, I watched the German nation soccer team’s opening match of EuroCup 2016 on a massive screen lit up behind the Brandenburg Gate with over 10,000 of their most invigorated supporter.

The emotions of the entire nation weighed on each roll of the ball. This national pride was something I have never really experienced so closely before. It felt much more like they were cheering for their country to prove its dominance as a whole rather than just on the soccer pitch. I’ve been lucky enough to have a been a several high stakes sport events, but never have I seen or felt the kind of intensity that was buzzing here. They roared when Germany scored, and collectively gasped when Ukraine had the faintest chance of scoring a goal. The man behind us grabbed us and yelled “If you’re not here to watch futbol, then you leave!” as my friend and I casually turned to each other to comment on a play. The intensity was embodied in the multitude of “Deutschland chants” throughout the match as Germans from all over the country ravenously participated in this nearly religious event.

​​
Germany stands out as a beacon of hope that shines through the uncertinty and turmoil which are indicative of modern life. They are a nation that is dedicated to not letting their past define them and one that is taking the lead in securing a stable and peaceful future for not just themselves but for the world.

← Stockholm: A pocket of perfection
Paris: The City of Love and of War? →