Mercedes-Benz SLS AMG Electric Drive: The Future of the Super Car is Here and it Doesn’t Make a Sound.

I wrote the following as part of my summer internship at Park Place Dealerships in Dallas, TX.

Everyone always wonders what the future will be like, from small children drawing space ships to grown adults that construct Sci-Fi blockbusters, everyone wants to know what the future has in store. When it comes to modes of transportation in the future, the ideas of teleportation, personal space crafts or flying cars are always among the first to be thrown into the mix, but the visionaries at Mercedes-Benz seem to have a slightly different idea and for the much more immediate future. 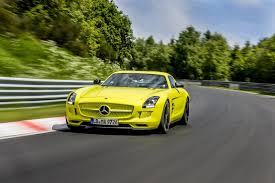 The Mercedes-Benz SLS AMG Electric Drive turns out with 750 hp and 738 lb-ft of torque, with all the twist obtainable from a standstill. The super car manages to do it all while having zero carbon emissions at a sticker price of $538,000. In comparison, the new-for-2014 petroleum-powered SLS AMG GT churns out 583 hp and 489 lb-ft. Mercedes-Benz asserts that the electrified SLS will hit 62 mph in 3.9 seconds before topping out at an electronically limited 155. The vehicles might look the same on the outside but under their shells the cars are totally different animals.

The Mercedes-Benz SLS AMG Electric Drive set a new speed record for a production electric car at the Nurburgring; the electric AMG super sports car mastered the legendary track in under 8 minutes. “Mercedes-AMG is the first vehicle manufacturer which makes it possible to circle the Nordschleife in less than eight minutes with an electrically powered series production vehicle,” said the automaker in a statement.

With three driving modes: comfort, sport and sport plus the Mercedes-Benz SLS AMG Electric Drive is a piece of technology that can satisfy any driver. At a top speed of 155 mph in sport plus mode the car is still as quiet as a collegiate library during the summer time. With the gas pedal on the floor-board, breaking records at the world’s trickiest race tracks, the loudest noises are the fans blowing cool air on your face as beads of adrenaline fueled sweat roll down your face from sitting in the driver seat of the car of the future. While emissions level requirements are being raised all around the globe and there being a global emphasis on protecting/preserving our environment, this rechargeable masterpiece is the perfect answer to the question of whether not the super car can survive in such conditions.